Consumers often think of carriers being somewhat stuffy and dusty, being slow to give customers flexibility and big at small print. But there are great exceptions to the rule with T-Mobile in the US, Free in France and Tele2 in Sweden, and we believe the next two years will see some further fun, entertaining and disruptive carrier offerings on the market.

We wanted to share a nice tidbit of data around T-Mobile’s subscriber acquisition and retention costs (SAC/SRC). Please note that since 2014 T-Mobile no longer reports SAC/SRC for the US market. Nevertheless, the chart below proves a clear point, the effect of T-Mobile’s “un-carrier” strategy on SAC/SRC.

For those of you who might not be familiar with the thought behind un-carrier, T-Mobile US decided to throw out the rule book by which carriers normally market towards their subscribers. Instead they introduced simple new plans, transparency, fun, clear and jazzed-up promotions to their base relying on the CEO John Legere’s personal involvement and heavy use of social media. T-Mobile US has become more of a lifestyle choice rather than merely a mobile service provider for its customers. 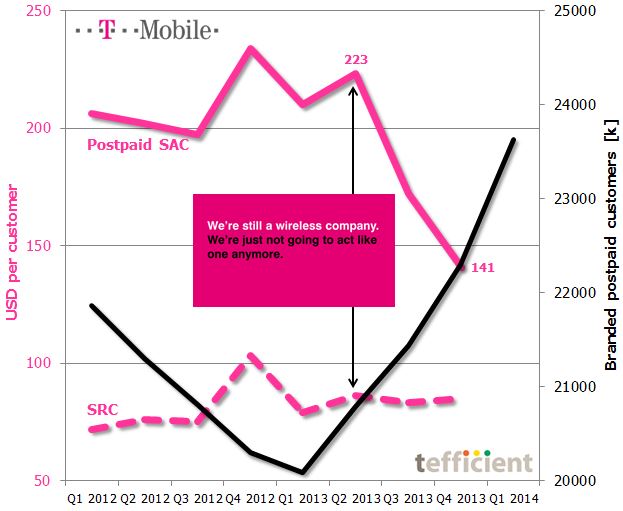 As the above graph shows, T-Mobile’s launch of their first un-carrier element at the end of March 2013 (highlighted) coincided with their conscious reduction of postpaid SAC. (Let’s effectively look at that as a Q2 2013, not a Q1 2013, launch). In the two quarters following, T-Mobile’s postpaid SAC went from USD 223 to USD 141, a dramatic and noticeable reduction of 37% in six months. Meanwhile, in spite of the lower SAC spend, the postpaid customer base increased from 20 million postpaid customers at the end of Q1 2013 to 22 million nine months later.

Before the very public announcement and commitment to the un-carrier strategy, T-Mobile US used more on SAC but still lost customers. Why? After all if you throw enough money at marketing and retail, your base should grow, no?

The idea is not difficult to understand in this day and age of socially savvy consumers, but putting such a disruptive approach into practice in an industry that still mainly single-mindedly sells service was – and still is – brave. In the early days of the un-carrier strategy, we can imagine some of the competition thinking “it’ll all end up in tears”.

But it hasn’t, has it? Today, after assertively rolling out their 4G LTE network and while systematically following their un-carrier initiatives, T-Mobile US has added 2.1 million total net customers during Q4 2014 only, and for all of 2014, T-Mobile added 8.3 million total customers, which represents an impressive 89 percent jump from 2013 (proforma incl. MetroPCS). Early indications seem to show that T-Mobile has now passed Sprint, and is next gunning for the (still distant) #2 position on the US market.

Un-carrier 9.0 was unveiled on March 18th – yet another industry-rattling move, aiming at disrupting wireless business services in the US, as T-Mobile has already done in the consumer segment. This includes the Un-carrier for Business™ bringing business plans with flexibility on the number of lines for 15 USD per month (to companies with 20 to 1000 lines) and a new Business Family Discounts plan giving strong credits for family lines if you’re already a business customer.

But un-carrier 9.0 also contained a proposition to pay off remaining device payments up to 650 USD if a consumer switch over to T-Mobile. Moreover, an ‘Un-contract’ guarantee was introduced promising consumers that prices will never go up for the plans they have – addressing a possible worry for T-Mobile’s customers since none of them are bound by contracts.

T-Mobile has not only grown, but also taken customers from competition, proven by strong porting ratios. (Porting ratio is the number of customers joining T-Mobile from a competitor versus those going in the opposite direction). For the full year of 2014, versus Verizon, T-Mobile had a porting ratio of 1.4 to 1.0. Versus AT&T it was 1.8 and against Sprint it was a massive 2.2 to 1.0.

And while competitors AT&T and Verizon are considerably bigger in scale, T-Mobile has undoubtedly gained a lot of ground by shifting their focus to the customer backed by a strong social share of voice. As Alexander Jutkowitz so well phrased it in his blog for HBR:

“Marketing is dead and customer loyalty killed it”

Consumers, especially millennials, follow brands they feel an affinity with, and turn their backs (if they have other options to choose from, or lower their consumption) to those who solely push a product.

So what are the potential steps to improving customer loyalty when consumers have the power of social media channels and an ever-increasing array of new cool social tools at their disposal (e.g. to take a very recent example, Meerkat video streaming on Twitter)?

It takes character to do what John Legere does. There is wisdom in showing personal commitment to your company strategy. Although Verizon and AT&T both have twice as many customers as T-Mobile, T-Mobile US’ social channels have resulted in a share of social voice that is 1.5 times the engagement of their competitors. The CEO John Legere alone has well over 1.2 million followers on Twitter! He spends hours daily actively listening, re-tweeting and joining in on the discussions his (and competitor’s) customers have on Twitter.

T-Mobile US also acts on customer feedback that largely derives from social media, by introducing services customers really and truly wish for. Stunning examples on the use of social to maintain and improve customer loyalty!

We know all about caps, limits, up-to-allowances on data, don’t we. And we know about buying handsets as part of our contracts and paying a premium for it. There are many examples. How would you feel if your bank told you, that as you’re not using up your money each month, they’ll take what’s left over every month. Not likely! But we pay for a data allowance every month, and few of us use it up each month – so it’s wasted and zeroed each month. That is crazy.

The 8th un-carrier initiative is around “Data Stash“, what you don’t use, you don’t lose, it is rolled over to the next month. T-Mobile US says they based their 8th initiative on around 40000 tweets from customers around this topic. And from March 22nd, also pre-paid customers can make use of Data Stash to rollover unused data for 12 months. They really have listened to the customers! As mentioned, the 9th un-carrier initiative also unveiled a un-contract commitment from T-Mobile to honor all existing plans without raising prices.

What happens to sand when you squeeze it in your fist – it spills over! Could it be that carriers often squeeze customers? The standard practice is 24 month contracts, and one can’t upgrade to a new handset until so and so many months etc. It does not make for happy customers. We stay because we have no choice. But as soon as someone offers a better alternative, most of us are off to greener pastures.

The focus shifts from binding to thinking of creative, relevant new offers and services that make remaining loyal to a service provider both fun and engaging.

And yes, T-Mobile US has done it; new customers can sign up and commit to stay on month-by-month basis. And what happened, they didn’t run away, they stayed and more churned over from competition.

The retail industry has for some time rewarded and surprised us with vouchers, birthday discounts and two-for-one offers. And we’ve seen how some of the mobile apps businesses have run incredible referral campaigns (e.g. Dropbox, Airbnb, Uber, Spotify, Evernote), rewarding for word-of-mouth. You name it, they’ve probably done it. So why couldn’t a carrier do the same (as they also know quite a bit about us, based on our customer data and usage patterns).

Tele2 in Sweden recently threw in a surprise for some of their customers as it upped data allowances at no additional cost, change to contract details or other bother. A simple unexpected gift to loyal customers that reads out as follows: “Thanks for being a loyal customer, we’ve upped your data allowance from 3 GB to 50 GB.”

And the reactions on social media were fantastic (example).

T-Mobile US selected a small group of customers and upgraded them to unlimited 4G LTE until the end of the year, at no cost to them:

“As you know, we love to give our customers more value without asking more from them”

An unexpected gift from your carrier with no strings attached easily sways customers to remain with their provider – and is far better marketing than spending on above-the-line promotions. It is personal and targeted.

While social media offers a loudspeaker to consumers, they also expect instant gratification and possible problems to be addressed then and there. Customer care is increasingly moving towards a mobile app experience, with well over 50% of smartphone users preferring to use a mobile app before calling customer services.

Managing your account, billing and being informed of possible downtimes is not enough any longer. Consumers increasingly also expect to find upgrade and special offers through the carrier’s customer service app. From a carrier’s perspective, this not only improves loyalty, but it also has the potential of taking down customer service costs.

Moving upward and onward, it is worth considering adding discussion forums and opinion polls also into the care channels – regardless how the consumer gets access to them. Enabling consumers to engage instantly with customer services, and voice their views – good or bad – allows carriers to rectify complaints quickly but also act on good ideas from the customer base.

We live in the “age of context” as Christian Hernandez so aptly calls it in his blog.

Our personal data is combined with public data and app level data. We have smart devices, sensors and wearables, and a layer on top for enabling faster, easier, contactless payments. This is a topic for a whole new blog, so we’ll keep it brief here.

The gist of it is, that all service providers have and collect a massive amount of data on us. So it’s time to dust off the data and make smart decisions on services that are personal and relevant for us based on what, when and how we consume.

If you give customers the freedom to stay with you – without those binding 24 month contracts – this not only gives flexibility for the customers, but also for carriers themselves.

There are plenty of examples on innovative new plans that e.g. T-Mobile US has introduced (Data Stash, Jump, Music Freedom, Family Line 1+2, etc).

Consider also the opportunity to do social and campaign-like offers over seasonal holidays, Valentines Day two-for-ones, Back-to-School time or around entertainment content partners – or even wackier limited offers such as flash sales on data.

Changing the mindset from binding to flexibility allows carriers to innovate faster and offer more relevant services based on usage and lifestyle to subscribers and win over new customers.

There is a better way to win over customers, without increasing SAC/SRC, and it is all about offering freedom and shifting our mindset towards customer loyalty!