Not a single time has Free Mobile changed its prices. Read that again. How many other telcos can say that?

In contrast, our industry is full of price changes, price campaigns, introductory prices and discounts. By now, mobile customers know that whatever the offer is this week, there’s no rush: The likelihood of finding an at least as good offer next week is high.

It’s ironic that it’s Free – a true industry disruptor – who personalises the price promise in our industry.

When Free launched its mobile offer in January 2012 it had just two price points:

And these price points – 2 EUR and 19,99 EUR per month – are today, almost four years later, still the same. No new price points have been added.

But just because the price is the same, the value isn’t the same as in 2012. This is how the 2 EUR plan has evolved: 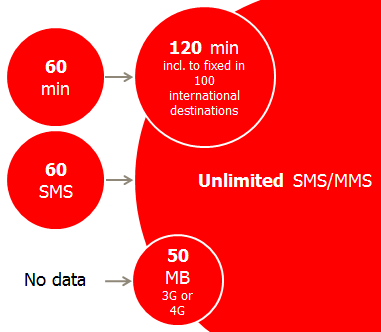 (Unlimited Wi-Fi is also included in the 2 EUR plan today, but we’re uncertain if it was there at launch). 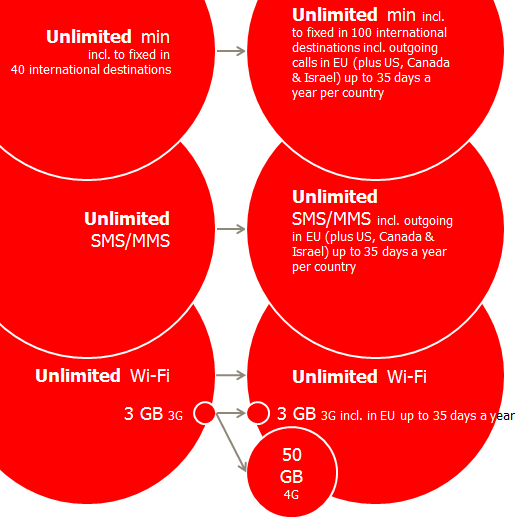 If Free wouldn’t have expanded the inclusive value, Free’s growth of its subscriber base wouldn’t likely have continued to be as fast: The sub-brands of Free’s competitors Orange, SFR and Bouygues Telecom (Sosh, Red, B&YOU) soon copied Free’s price points. (But they have had difficulties to follow the value expansion).

The graph below shows the mobile net adds per French MNO. Every quarter since launch, Free’s growth has outpaced competition. 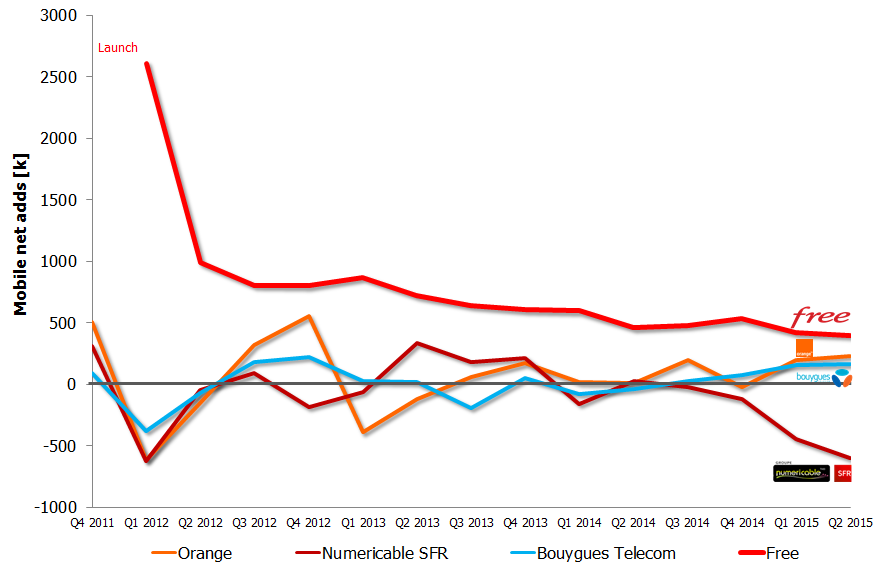 Free’s consistency in pricing and its systematic expansion of inclusive value are contributing to Free’s Nonstop Retention Index. With an index of 54, Free takes the runner-up position, just behind T-Mobile USA.

Let’s go through the six categories that make up the Nonstop Retention Index to explain what else Free does right – and where further improvements are possible.

Free is currently the global leader in the inclusive value category. As shown in the introduction, Free has significantly expanded the value in both plans. 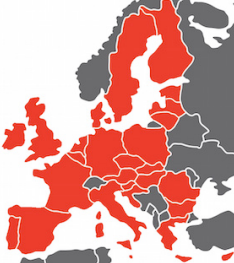 If we focus on the 19,99 EUR plan, roam like home has been added for all of EU (plus USA, Canada and Israel) – with conditions so generous that it’s actually realistic for normal users to forget country borders.

Note though that whereas the unlimited voice and messaging is valid for up to 35 days a year per country, the 3 GB of roam-like-home mobile data is a total for all those countries. But it still means that a Free user can live a month abroad each year and then use all of his/her 3 GB of 3G data abroad without paying more than the usual 19,99 EUR.

Free has also upped the mobile data allowances at home. First from 3 GB to 20 GB and this year from 20 to 50 GB. The reality isn’t as great as Free makes it sound, though:

Even though Free’s 4G network has been expanded much, the focus has been to first fulfill the regulator ARCEP’s 3G requirements: 75% population coverage on 3G three years after launch. In April this year, ARCEP confirmed that Free reached this target.

As of June 2015, Iliad (the company behind Free) reported 5266 3G sites and 3991 4G sites – an impressive rollout of 838 3G sites and 1892 4G sites so far in 2015. Still, looking at the latest time coverage measurements of OpenSignal, Free’s 4G network is having the least coverage of the French MNOs (click to enlarge): 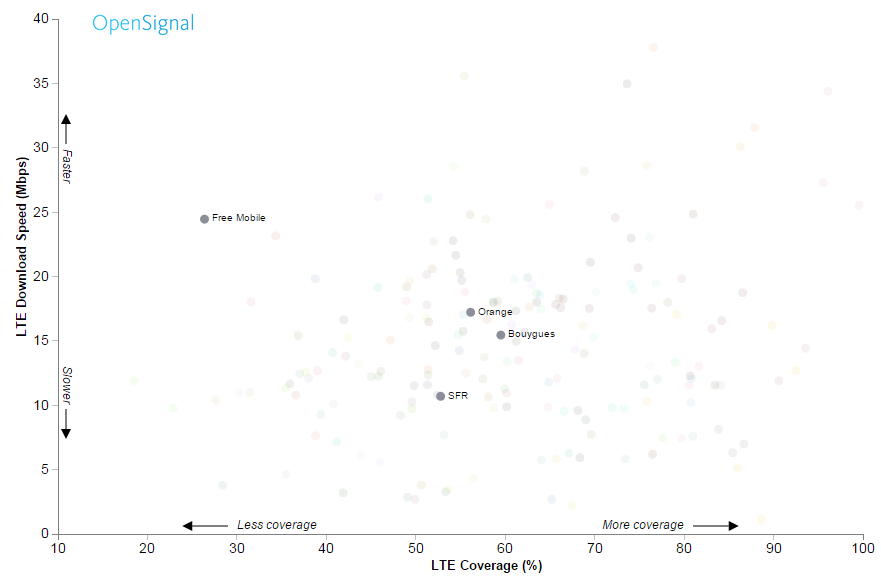 Noticeably though, it is the fastest 4G network in France where it covers (which indicates low load).

Free’s Nonstop Retention Index is positively affected by the inclusive unlimited Wi-Fi – which might compensate for some of the lack in mobile network coverage. Most (all?) of this Wi-Fi is provided by customers’ Freeboxes which double as public Wi-Fi hotspots. We normally refer to this as homespots – and Free was one of the first operators globally to realise its potential and make offloading from mobile to Wi-Fi homespots automatic. Free did this to improve the customer experience, but it was also necessary from a cost point of view. Free’s mobile network was small to begin with and to be able to offer those low mobile prices, Wi-Fi became instrumental – otherwise too much data traffic would be carried on the Orange network. Free has a national roaming agreement with Orange, but the cost of using their network is motivating Free to offload as much of traffic to Wi-Fi – and to expand its own mobile network.

The bundling discount given to customers who take both mobile and triple-play from Free (touched upon above) is also positive for the Nonstop Retention Index. Also here, there’s been an expansion in value: Today up to four SIMs per Freebox get the discount. At launch, it was only one.

Free is already winning the inclusive value category in the Nonstop Retention Index. To improve even further, Free could consider including some content or e.g. consider zero-rating music services (collectively). Native Wi-Fi Calling would also, especially given Free’s Wi-Fi network and lack of cellular indoor coverage, be positive.

No waste of data

This is a weak category for Free who doesn’t have any rollover or shared data – at the same time as mobile data isn’t unlimited (even though Wi-Fi is).

But the 2 EUR plan (which includes 50 Mbyte of data) can perhaps be seen as a free data-SIM for Freebox customers (as the price then is discounted to zero). Nothing prevents having multiple SIMs.

Since Free solely offers non-binding contracts and treats new and old customers the same, this category is one of Free’s strongest.

In the introduction we also showed that Free hasn’t touched its price points a single time. This contributes positively to the index.

There are options to the handset installment plans, though. Customers could of course pay upfront, but Free is since end of 2013 also offering a handset rental option. Similar to the installment plan, it’s only provided together with the 19,99 EUR plan, but customers on the rental plan can downgrade to the 2 EUR plan – if they pay 5 EUR extra per month for the rental.

Removing these restrictions would improve Free’s Nonstop Retention Index to 57.

It’s very simple to become a Free Mobile customer: Two plans to choose between and no extras to decide upon.

Adding a handset isn’t complicated either. Pick one and decide on how to pay for it – upfront, in installments or as part of a rental agreement.

Even without referral and loyalty programs, Free scores OK in this category partly thanks to its multi-user quad-play discount which allows up to four mobile SIMs to get up to 4 EUR discount each per triple-play Freebox account.

We have covered most of this already, since the handset options affect how decoupled the service actually is (see Contract freedom & fairness above).

Since Free doesn’t subsidise handsets, there are, as said, three ways to get a handset from Free: 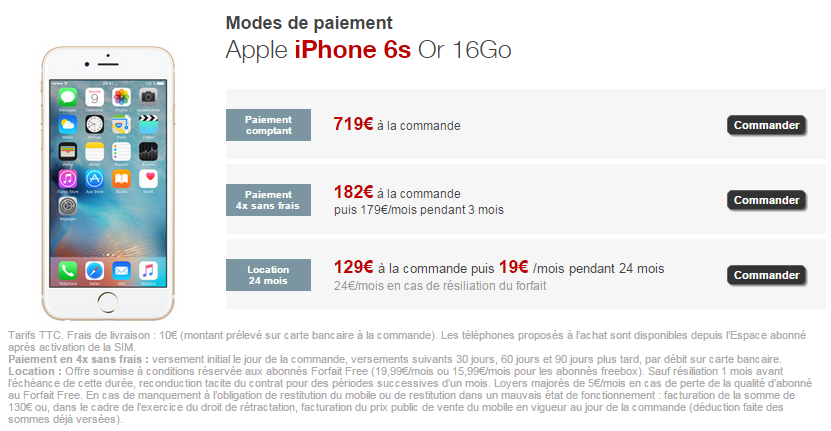 The picture shows one example of these three options. Note that the installment option is quite a tough one: The phone has to be paid off in 4 months (total price the same as upfront).

Free has reported that handset rental now stands for 50% of Free’s equipment revenues and it’s understandable why it is successful – the payments in the iPhone 6s example above sums up to 585 EUR after 24 months – 134 EUR less than with the other two options. But the handset needs to be returned in a working condition – if not the customer has to (in this example) pay an additional 130 EUR. Keeping it is also an option, if so the customer needs to pay the difference between the “day price” of the phone and what has been paid.

If Free provided also non-rental customers with a handset trade-in option, it would lift Free’s Nonstop Retention Index yet a bit more.

To summarise, Free’s initiatives render the brand a very high Nonstop Retention Index of 54. The world is upside down when the same brand having Europe’s lowest prices (or thereabout) is providing its customers with higher inclusive value than anyone else. Not difficult to understand why Free’s growth continues even though not all aspects are perfect yet.